VietNamNet Bridge - Economists have warned that many problems may arise if VND700 trillion is pumped into the national economy to raise the credit growth rate to 22 percent and obtain 6.7 percent GDP growth rate this year. 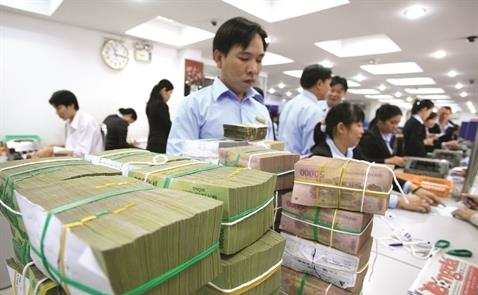 Bui Quang Tin, a lecturer at HCM City Banking University, said the increase in money supply will have an impact on GDP, inflation, interest rate and exchange rate.

He pointed out several concerns. First, the economy will need time to absorb the money. If injecting money into production, capital turnover would take 3-6 months on average.

Second, when the money supply increases, people may pour capital into non-production fields such as real estate and securities, fields called ‘instant noodles’ because return on investment capital can be done relatively quickly.

Banks have been asked to restrict lending to these sectors. If banks pour too much money into real estate, the real estate bubble in 2006-2008 will come back.

If money is disbursed for real estate and securities, the bad debt ratio will increase.

Tin said that IMF and WB had warned about the high credit growth this year which may bring new risks to the banking system.

“The high credit growth may help obtain targeted GDP growth rate, but it will also cause negative impact, which may be even higher than benefits. These are risks in inflation, exchange rate, interest rate, production cost and bad debt.”

Dinh Trong Thinh from the Finance Academy commented that increasing lending is the easiest way to stimulate the economy and boost investment when public investments cannot be expanded.

However, he said that consumer demand is now relatively low, while enterprises’ demand for investment expansion is not high. Therefore, it is necessary to keep watch over absorbing money into the national economy.

If the money can be used effectively, it will bring benefits. However, money needs to be sent to the right places, or it will cause shocks to credit and exchange rates, which will affect inflation.

Thinh cannot say for sure if the pumping of VND700 trillion would help Vietnam gain the targeted high GDP growth rate.

Nguyen Tri Hieu, a renowned banking expert, commented on Nhip Cau Dau Tu that Vietnam wants high credit growth rate, low interest rate and inflation rate, while these are opposite targets. He said this would be a burden on the central bank.