The Ministry of Natural Resource and Environment has officially established an inspection team to look into scrap imports. 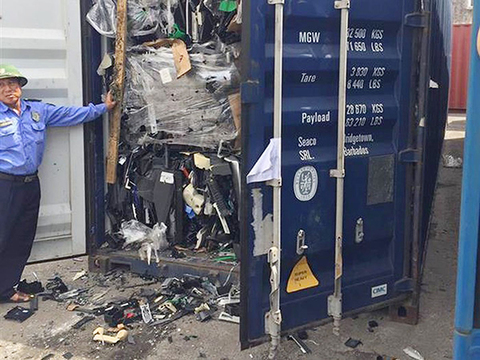 The move follows a decision made by Prime Minister Nguyen Xuaân Phuc on July 18.

Viet Nam has a demand for scrap as material for production, but it only benefits the processors, not the environment. A large volume of scrap containers therefore have been left unattended at ports.

The PM has assigned the ministry to inspect imports of scrap and handle violations by revoking businesses’ licences. The ministry has also been tasked with reviewing all import permits to ensure they have valid quotas.

The Government will only consider granting licences for scrap imports to enterprises when they can prove the demand and capability to use scrap as raw material for production.

Inspections will start in the middle of this month and the results will be reported back to the PM at the start of October.

In another move, Minister of Industry and Trade Tran Tuan Anh has issued a directive on enhancing State management of scrap imports in order to implement the PM’s guidelines on strengthening the management of the import and use of scrap.

The Department of Export and Import under the Ministry of Industry and Trade (MoIT) said the move was aimed at protecting the environment and sustainable and effective economic development.

Departments under the ministry have been instructed to co-ordinate with relevant ministries and sectors to examine legal regulations on scrap imports to enhance management in the field.

They are also responsible for submitting to the MoIT a proposal to issue a circular, aiming to suspend temporary import and re-export for some types of scrap, while reporting to the PM on measures to strictly manage transit activities under the goods transit agreements that Viet Nam has signed with other countries.

The minister asked the departments of industry and trade of central-level provinces and cities to collaborate closely with local departments of natural resources and environment to show enterprises how to implement regulations on the imports of scrap.

Enterprises under the ministry were asked to comply with legal provisions on the import and use of scrap as raw materials for production, and on environmental treatment.

According to the Customs Supervision and Management Department under the General Department of Customs, since China banned the import of 24 types of scrap, the amount imported to Viet Nam in 2017 and the first five months of 2018 had increased.

Domestic companies have imported scrap from many different countries for production demand.

Currently, many firms are taking advantage of legal loopholes to import scrap into the country, and over 6,000 scrap containers that did not pass customs are sitting at the country’s seaports.

At a recent press conference, Mai Xuan Thanh, deputy general director of the General Department of Customs, said the department would not accept any imported scrap shipments that did not meet environmental protection conditions or had no clear origin.